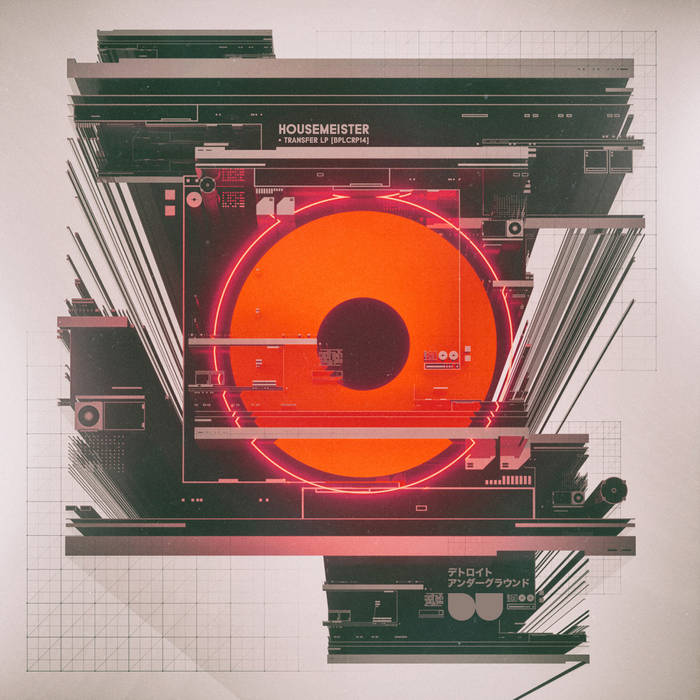 Housemeister "Transfer" Detroit Underground
Berlin-based producer and dj Housemeister has had an impressive career thus far. He has produced arround 50 EP´s and five albums including 2 concept albums, one made totally on a gameboy with a portable recorder on the beach and another one for BNR just using the teenage engineering OP-1 synthesizer in hotelrooms and planes. Hyperactive child of Berlin's techno scene, „the Kraftwerk on LSD“ Housemeister is a key figure of the German and international nightscape. High energy with a punk attitude, this special character allways goes his own way with his very own definition of techno. he runs label AYCB, touring the globe since 20 years, does grafikdesign & he is resident at Suicide Berlin.
In 2015 he remixed Dave Clarke, Matthew Herbert, Dj Deeon, Robert Armani and Artist Unknown.
Now he introduces Transfer his new full length album to be released in Detroit Underground January 18th 2016. Both cassette tape and digital formats featured.
On his new work, he will give his listeners something new as he delves into a more ambient electro sound, exploring new noise and allowing echo and space to embrace him, thru 9 emotional hardware only compositions. Housemeister create these quality cuts live and with such passion is a testament to the German’s forward-thinking skills.
"Darkside" is the first of them, sleepy downtempo electro beats for starting, echoed synth hits and flanged hi hats make the pace until pulsating and spaced machine drops and funky basslines took over the arrangement. Filter sweeping, manual drum breaking and going with the flow arrangement make the rest.
Following, "Digital identity" plays with asymmetrical delays and 808 toms in the beginning until massive drones and ambiences paired with bleeps and more percussion layers appears subtle.
"Inventer de rêve" goes more spacey, reverberated pads, square wave leads, portamento and slowed down beats made of fat kicks and sharp percussive components. A dreamy one.
"Sternenwind" reminds the melancholy of central Europe in the eastern front days, beautiful synth lines, concrete beats and twisted parameters to celebrate the years gone past.
"Worms" is again a Scifi workout with single note harmonies, abstract sound design, obsessive rhythms and old school electro touches…but at slow tempos.
"We are data" is pure kraftwerkian homage, alien arpeggios, broken beats and an industrial edge to keep things dirty.
"Der Codex" bring us memories of space landings and digital water, resonances, pads, drones, lotsa reverbs and drones until the beat appears surrounded by massive room and set the pace for the melodically synthetic end.
Near the end, "Multiversum", revisited the early days of IDM, melting melodic synthesizers with experimental landscapes under a broken rhythm that put everything in place.
Finally "Transfer" end with this trip with bell like sequences, resonant bleeps and echoed drums as base while singing android synths fly over the stereo field.
A collection of sounds to transfer you to another dimension in a chilly mood but mentally and analogue induced.
we hope you like it.